Lost in Transnationalism: Pacific and Asian North American Religions in a Globalized World

Please forward this e-mail to others who may be interested.

About the APARRI Conferences: Since 1999, the annual APARRI gatherings have been opportunities for scholars and community leaders involved in work on issues of Asian American and Pacific Islander religion to share research, exchange ideas, and build relationships in a relaxed, supportive conference setting. Emphasis is placed on the development of APA religious studies as a field, the encouragement of emerging scholarship, and the mentoring of scholars and leaders. About APARRI 2009: At the end of the first decade of the 21st century global connections of all sorts are receiving more heightened attention than ever before. The incoming Obama administration is the subject of worldwide scrutiny, not simply because it assumes the White House at a time when U.S. influence on the international stage is met with more ambivalence than it has in a century, but also because the election of an African American signals a sea change in the evolution of American democracy and, consequently, new prospects for democracies all around the globe; the American economy’s precipitous decline over the past year has had the effects not only of American jobs lost, American consumer power diminished, and American companies put at risk, but has negatively impacted the valuations of real property, labor, and investment and expansion opportunities worldwide; and escalating tensions in Southwest Asia, southern Africa, and elsewhere suggest that international interventions and population migrations will be no less an aspect of the early 21st century than it was in the last decades of the 20th. In this context of global connectedness, APARRI 2009 asks what role religion plays in the unfolding of new transnational regimes. Of what significance is the religious to those crossing national and cultural borders? How does the networked nature of the world at the end of the first decade of the 21st century impact the expression of religion in America? Of what significance is the global to the spiritual and vice-versa?

Entitled “Lost in Transnationalism: Pacific Asian North American Religions in a Globalized World,” the 2009 conference will be held August 6-8 on the campus of Claremont McKenna College in Claremont, CA. Located in the Greater Los Angeles region, the conference site emphasizes LA’s roles as a “global city” and a “gateway city” and highlights California’s place in trans-Pacific networks. For Plenary I on Thursday evening Aug/6, filmmaker Valerie Soe and Prof. Russell Jeung will screen their new video documentary Oak Park Story, about three families negotiating class, culture, and race at a low-income apartment complex in East Oakland, CA. Plenary II on Friday afternoon Aug/7 will feature a panel with various institutional perspectives on the connection between transnationalism and religion in the immediate Los Angeles area. And Plenary III on Saturday afternoon (Aug/8) will offer insights on faith in a globalized world from within the APARRI academic network. Concurrent sessions will showcase research-in-progress, and structured mentoring sessions will be available for students and junior faculty members. For more details on the conference, please go to www.pana.psr.edu/aparri-2009.

I am pleased to announce another FREE lecture on 6/6/2009.  Not so coincidentally, the publication of my revised and updated dissertation “From Slaves to Sons” in Chinese by Tien Dao will happen soon after this event.  Please join me in celebration of my publication.  This lecture will show some of the parallels between the Galatian problem and the some of the issues facing North American Chinese churches.  Galatians was my PhD dissertation.  I hope to show relevance between scholarly study and application in this lecture.  I believe Paul’s gospel still speaks to us today.  There is plenty of seating.  Feel free to grab your Cantonese Christian friends.

For more information, to register, and get directions, go to: 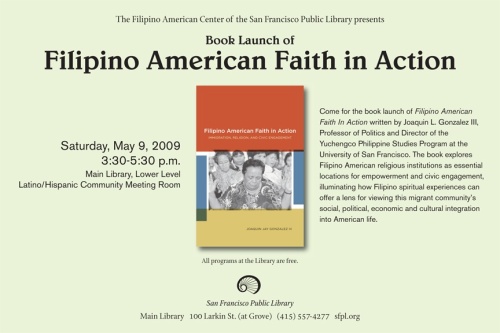 ISAAC and the Pacific Asian American & Canadian Christian Education project is delighted to announce the scheduled release of the Asian American Christianity Reader. It will be available in May, just in time for Asian American Heritage month. See www.aacreader.com for more information.

The UCLA Asian American Studies Center, as an official U.S. Census Information Center (as a co-partner with National Coalition for Asian Pacific Community Development), is pleased to provide this 2009 statistical portrait of the Asian American and Native Hawaiian and Pacific Islander populations produced by the US Census Bureau for Asian Pacific American Heritage Month, which will take place in May, 2009. The portrait provides current census data, population projections, and internet links that should be useful for research, planning, writing and general educational purposes.

Go to the following links to view the data:

SANACS presents the following ISAAC lectures/panels in the Bay Area for April 2009:

Professor Noh is frequently quoted in the media as an expert on Korean reunification. In this lecture, he will detail the ideology of “Juche” that lies behind North Korea’s “collective solidarity” and will go on to argue that Korean reunification could lead to economic prosperity. From a theological perspective, he will explore how Christianity could play a role in establishing peace on the Korean peninsula.

Trained as a theologian, he received his MDiv from Harvard, his PhD from Union Theological Seminary, and has taught at Yale. His most recent book was titled, “A Paradigm Shift for Peace in North East Asia.”

Moderator:
Timothy Tseng, Executive Director of Institute for the Study of Asian American Christianity and Adjunct Professor of Religious Studies and Asian Studies